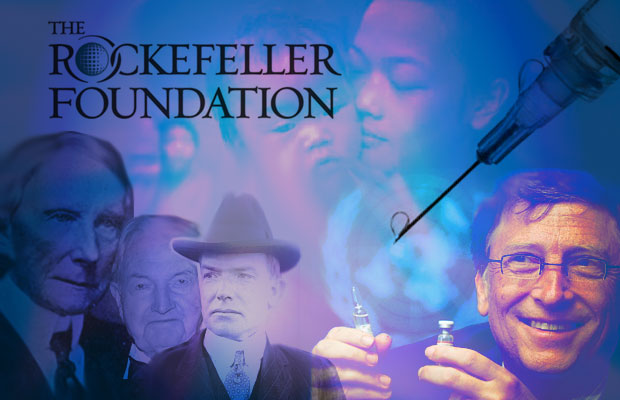 We need to ask ourselves; is the general health of our children improving or is it worsening?  Western countries are healthier than ever before, yet the number of autoimmune and neurological disorders in our population has skyrocketed since the early 90s.

In the United States, 1 in 6 children is diagnosed with a developmental disability, which is an increase of 17% within a decade.

While the exact specifics as to why vaccines damage are not fully understood by the public at present, the connection independent research has found between vaccines and a number of diseases is incontrovertible.  Vaccines are just one piece of the health puzzle, which is plaguing the current generation of children and young adults and the truth needs to be available to the community, so they can make the right choices for future generations.

Rarely do we hear the anti-Semitic Zionists/Globalists discussing and linking the damage done by vaccines on some people.  The evidence suggests the people who are promoting third-world immigration invasion into Western countries are campaigning for the destruction of the family through feminism, calling people "racist" or "extremist"  and are the same people who promote vaccines, while they, the elite, have access to 'clean' vaccines.

Dr Stephanie Seneff explains Autism and it's causes link to GMO's
and the common Herbicide used on many of them.
For Educational and Research use only

Studies Confirm (Yet Again) Link between Mercury and Autism

"The world today has 6.8 billion people. That's heading up to about nine billion. Now if we do a really great job on new vaccines, health care, reproductive health services, we could lower that by perhaps 10 or 15 percent!"

Bill Gates has not been quiet in his quest to ensure that children all over the third and emerging worlds receive cheap, cost-effective vaccinations.  He has been touted by most mainstream media sources as a philanthropist and heralded for his humanity.  In 1999 he was successful in establishing the Global Alliance for Vaccines and Immunization, shortened to GAVI Alliance' which saw pharmaceutical companies, private business, and the UN come together with a world plan.

Unfortunately, the overall goal of these conglomerates and pharmaceuticals is not about ensuring the best for the human population.  The goal links back to the United Nations Agenda 21, and the newer Agenda 2030, which are the same as the New World Order.  The ultimate goal is to reduce the human population by vast numbers, and vaccinations are helping this through increased mortality rates, introducing killer disease and mass sterilization.

In 2010, while digging through the annual reports of the Rockefeller Foundation, Jurriaan Maessan discovered conclusive proof that there were a number of research projects being funded into the development of "anti-fertility" vaccine.  Scientific research for this dated back to the late 1960s, and successful research took place by at least 1988.  There are now a number of ways to sterilize both men and women via injection as well as ways to terminate pregnancies and induce spontaneous abortion. 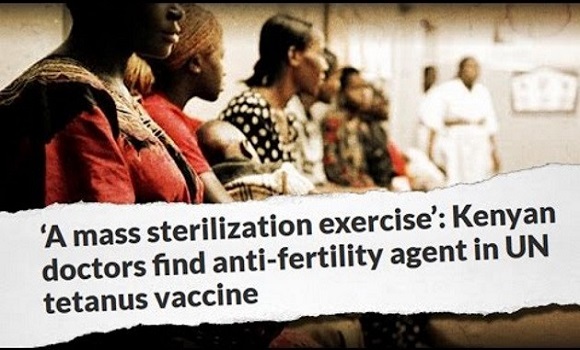 Eugenics Today: How Vaccines Are Used to Sterilize the Masses

Can Donald Trump Save Babies Like This From Dying?

Australia: Everyone Must Get Vaccinated, Except the Prime Minister’s Daughters

Why is this Doctor being silenced by the Aussie Vaccine Mafia?

Aluminum in Vaccines: Where Are the Safety Studies? 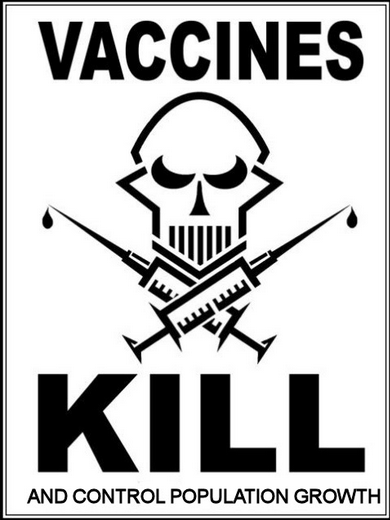 The standard 'story' that has been accepted in the Western world is the origin of HIV as a form of an evolutionary event.  The standard theory is that a human, most likely an African native, received a wound while handling a chimpanzee which was carrying a similar virus, and the African native was contaminated via an open wound.

Recent research and scientific consensus have since found, AIDS could never have occurred in this manner.  In 2001, the Royal Society of London published the proceedings of a conference they held in order to determine the cause of AIDs and origins of HIV.  These proceedings were published and available for anyone in the world to read.  Part of these proceedings debated the possibility that HIV-1, the most widespread AIDS virus, evolved from vaccine contamination and subsequent transmission to African villagers.

The scientists involved in the debate focused predominantly on the oral polio vaccine (OPV).  Because this was a live vaccine derived from monkey kidney cells, it has been proven to often contain cancer viruses such as SV40.  By the end of the symposium, delegates concluded that the monkey kidney theory was not the cause of the AIDs origins.

The proceedings chose to neglect the hepatitis B vaccine, even though this too was produced in chimpanzees during its initial pilot test conducted in both the gay male population of New York City and Central African Villagers throughout 1972 to 1974.  It could be argued as extreme negligence which was overlooked, considering AIDs emerged in both of these communities by the late 70s, even though they are so demographically distinct in nature.

Dr. Oz says NO!!! TO VACCINATING HIS KIDS! 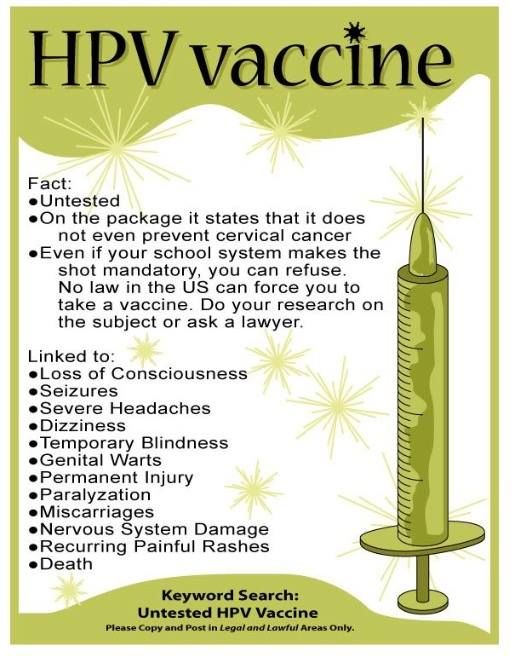 Apparently this guards women against cervical cancer, however specific evidence shows alternative outcomes; including it can actually increase precancerous lesions by up to 45%, the adverse reaction to Gardasil are extremely high with rates in the US reporting 89 deaths, 297 miscarriages/stillbirths, and 370 abnormal pap smears within the 4 years after it was introduced.

The Lancet journal published evidence in 2002, which showed this vaccine was responsible for approximately half of the 55,000 non-Hodgkin's lymphoma cases that occurred each year.  This vaccine was contaminated with SV40, a monkey virus, that was known to cause cancer.  In 1994, Dr. Michele Carbone, a researcher, found the virus which had never before been detected in humans in half of the lung tumors he was studying.  Sixty different labs confirmed the results and it has now been found in many human cancers, including the brain, bone, lung, and lymphatic cancer.

The statement from GlaxoSmithKline stated that Rotarix carried no known human health risks.  Considering there are zero studies about this virus concerning human illness, this is skeptical at best.  Rotateq, Merk's version of the rotavirus vaccine, was also discovered to contain contaminants of the porcine circovirus with the FDA also investigating.

A batch of measles vaccinations was discovered to contain small levels of retrovirus avian leukosis, (AVL), virus.  This virus is known to cause cancer in chickens and it also questions how this virus found its way into vaccinations, considering by law, manufacturers have been required to breed leucosis-free chickens for their eggs since the 1960s. 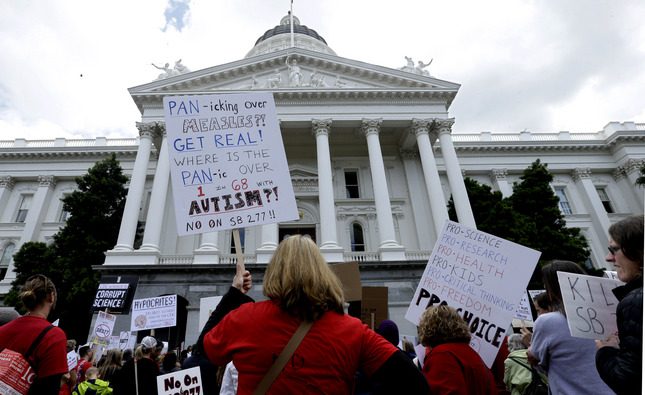 The Department of Health in the UK was forced to release confidential documents which outlined the initial approval in the 1980s of the measles, mumps, and rubella, vaccine (MMR).  This was after a Freedom of Information Act was filed concerning the British government withholding information about the vaccination from the public.

The documents show that GlaxoSmithKline who manufacture Pluserix was aware of problems with the vaccine causing adverse events in children, including encephalitis and other conditions that are associated with autism.  Other issues caused include gut problems, brain damage, and diseases.  The United States Department of Health and Human Services confirmed in an email that they compensated in vaccine injury cases where the children exhibited encephalopathy or brain disease.  They also admitted that and/or encephalopathy displays an array of symptoms which include autistic behaviour, autism and or seizures.

There is also a known link between Rubella and autism, yet it is still pushed to the public that this vaccination does not cause autism.  In the 1970s, a researcher called Stella Chess discovered a prevalence of autism in children who had congenital rubella syndrome, and it was 200 times more likely than that of the general population.

The Australian Vaccination-Skeptics Network has compiled a list of 68 medical journal studies that support the link between vaccinating and autism.