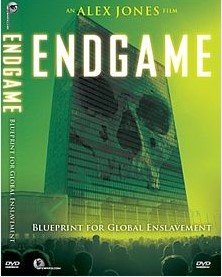 For the New World Order, a world government is just the beginning. Once in place they can engage their plan to exterminate 80% of the world's population, while enabling the "elites" to live forever with the aid of advanced technology. For the first time, crusading filmmaker ALEX JONES reveals their secret plan for humanity's extermination: Operation ENDGAME.

Never before has a documentary assembled all the pieces of the globalists' dark agenda. Endgame's compelling look at past atrocities committed by those attempting to steer the future delivers information that the controlling media has meticulously censored for over 60 years. It fully reveals the elite's program to dominate the earth and carry out the wicked plan in all of human history.

Endgame is not conspiracy theory, it is documented fact in the elite's own words.